No doubt that 'Shadow of a Doubt' is great

Ennui-ridden teenager Charlie (Wright) finds her drab world filled with life and hope of excitement when her legendary, globe-trotting Uncle Charlie, the man she is named for, pays a surprise visit to her and family. But Charlie's delight soon gives way to suspicion, then fear, then terror as she gradually comes to realize that he is hiding a dark secret -- that he is a serial killer on the run. 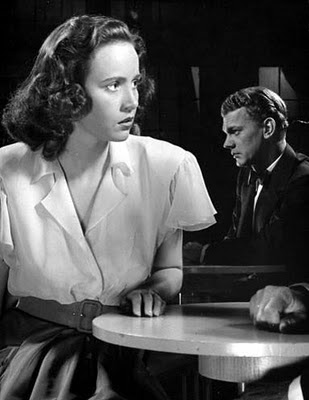 This is said to be Hitchcock's personal favorite among all the movies he made, and he was well within his rights to be very, very proud of it. With a script that is absolutely perfect in every way, a setting that captures the essence of the idyllic small American town so perfectly that Ray Bradbury would be moved to tears, and a cast that all deliver great performances in parts it seems they were born to play, there simply is not a single sour note in this movie.

It starts with a script that deftly sets up all its characters and manages to draw them as fully realized, three-dimension people within minutes of their first appearances on screen... usually through subtle character actions or exchanges. The most impressive of these is the film's lead character, a typical whiny restless teenager who in a script from lesser writers and interpreted by a lesser director would have been extremely annoying and someone you might wish ill upon. However, the character is so deftly written here and her reactions so believable--a mixture of childishness and adult and perception of what it means to be an adult--that you are rooting for her almost from the moment she is introduced into the story.

The same is true of the opposite side of the coin, the film's other Charlie... a man on the run with a secret, who may or may not be a serial killer. Like Young Charlie, he is deftly established a few touches that are followed up with further development that lends texture and deep character to him.

These two characters, and the oft-referenced "special bond" that exists between them, are the solid center around which story and other characters rotate, each developed as they relate to the two Charlies and each eventually emerging as fully realized as they are. Even the "special bond" ends up taking on personality, evolving from childish imaginings born of coincidences to something more real and that gives sinister weight to either Charlie when the younger of the two promises she will kill the older one if he hurts her mother.

Heck, this script is so perfect that the insta-romance the develops between Young Charlie and one of the detectives who come into town on Uncle Charlie's tail doesn't bother me one bit. Where this has nearly ruined a couple other Hitchcock films for me, here it

Of course, as well-written as these characters are, they would have withered in the hands of the wrong actor. Here, the casting is so absolutely perfect that the actors have an exponential impact when it comes to breathing life into the characters. Casting Joseph Cotton as a serial killer, who up to this point in his career had played nothing but lovable good guys, was a stroke of genius, and petite Teresa Wright nails her teenaged character perfectly despite being 25 at the time this film was made. Even the bit-players--like the small town's librarian and traffic cop--fit their roles perfect and instantly make the audience feel they know the person in question.

The great script and the perfectly cast actors are further supported by a great location and even better sets. A problem I sometimes have with Hitchcock's American films is sometimes jarring and obvious difference between footage made on sets or the studio back lot versus footage made on location. The quality of the environments change so drastically that I am sometimes pushed out of being absorbed in the movie. Not so here. Location and sound stage merge seamlessly and undetectably to form a perfect whole.

If you only watch one Hitchcock film, this is the one to choose.