'The Mad Ghoul' is worth knowing

College chemistry professor Alfred Morris (Zucco) re-discovers a formula for a gas that ancient Central Americans used turn people into pseudo-living zombies, as well as a means for reversing the transformation. He uses his assistant, Ted (Bruce), as an unwitting human test subject while trying to put the moves on Ted's opera-singing fiance (Ankers)... but when the antidote for the gas turns out to only be temporary, Morris's life and Ted's psuedo-undeath become a lot more complicated. 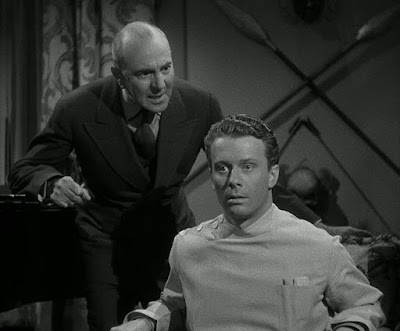 "The Mad Ghoul" is a horror film from Universal Pictures--the studio that bought the world "The Mummy", "Dracula", and "Frankenstein"--that sounds like a film from Monogram or PRC, with its mad scientist with an even madder scheme, a young couple being threatened by evil, and a crusading reporter who is going to stop the monster the police have been unable to catch.

What the writers and director does with those elements are a great change of, though: The crusading reporter ends up, the young couple's romance is revealed to have been over even before the film starts, and the mad doctor's mad scheme keeps getting more insane, first because he was cocky and had to cover up a failed experiment and then because he wanted to remove all rivals for the woman with whom he believes he shares a mutual attraction. (Some of my favorite parts of the film is when George Zucco and Evelyn Ankers' characters are talking past each other; Zucco thinks they are expressing their love for each other while Ankers thinks she's just unloading her sorrows to a sympathetic ear. These scenes feature some nice acting and even better writing, because they perfectly communicate the notion that Zucco's character later expresses, after he realizes he was mistaken: "Sometimes we see what we want to see.")

The cast of "The Mad Ghoul" all provide good performances. Zucco is in particularly fine form, playing the crazed heavy he specialized in but with a tiny bit of nuances thrown in. Robert Armstrong is also fun as the "I'm smarter than the cops" newsman who populates films of this type, and while I saw his brutal end coming before it actually happened, I was a little sad to see him go. Meanwhile, Ankers and Bey play the kinds of characters they portrayed in many other films, and they do it with their usual skill. Finally, David Bruce, in one of his few starring roles, is good as what initially comes across as the standard, fairly bland romantic lead, but becomes an increasingly interesting and nuanced character as the film unfolds.