The 'Strange Case of Doctor Rx' is worth investigating

The Strange Case of Doctor Rx (1942)
Starring: Patric Knowles, Anne Gwynne, Mantan Moreland, Edmund McDonald, Shemp Howard, Samuel S. Hinds, and Lionel Atwill
Director: William Nigh
Rating: Seven of Ten Stars
A successful private detective (Knowles) puts off early retirement at the behest of both a friend in the police department (McDonald) and a high-powered attorney to mob (Hinds) whose clients are being murdered by a seemingly invisible, intangible assassin. 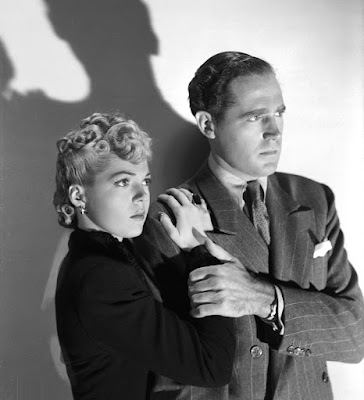 "The Strange Case of Doctor Rx" is a fast-paced comedy-thriller starring a solid cast of mostly under-appreciated B-movie actors who are working with a script full of snappy dialogue and an intriguing murder mystery that deepens and becomes more convoluted as the film unfolds. In fact, everything about this film becomes more convoluted as it unfolds.
By the time "Strange Case" came to an end, I had the amusing thought that someone had challenged writer Clarence Upton Young to include every single mystery B-movie mainstay into one script... and he accepted. As this film unfolds, we get a charming gentleman detective and his befuddled manservant; a go-to-any-lengths-to-get-the-story lady reporter; cops who are tough but not bright; a rich, possibly crooked lawyer with a possibly even more crooked wife and family; gangsters and a gun moll; a suspicious mystery man who may or may not be the killer; a mad scientist; and a guy in a gorilla suit. In the end, nothing makes a whole lot of sense--and it feels a little like Young was hard-pressed to even formulate a satisfactory resolution to the everything-but-the-kitchen-sink mess he'd created. (I was left with one major question at the end, a question that was obviously left unanswered on purpose as it gave Mantan Moreland an opportunity to give us one final, mildly disturbing laugh.
Speaking of Mantan Moreland, this is another one of those films where he's more of a hero than any of the other characters give him credit for; his character isn't as smart as the one he portrayed in 1941's "King of the Zombies", but he absolutely key to the main hero's success and he makes a great personal sacrifice in the process. So, Moreland is perfectly cast here, as is everyone else. Most of the players in the film are at their best, with Moreland, Anne Gwynne, and Shemp Howard (of Three Stooges fame) are particularly fun to watch, even if Gwynne's performance is undermined a bit by the disjointed manner in which her character drifts through the story. Lionel Atwill plays a small but crucial role in the film, and the presence he lends is more a result of brilliant casting than anything Atwill does on screen. (Although, given his ability to slather on the villanous attitude, perhaps the harmless air he  air he has about him in the few scenes he's in is remarkable. At any rate, Atwill just being there brings with it certain expectations that help drive the story along and make it that much more entertaining.
"The Strange Case of Doctor Rx" is one of five movies included in the "Universal Cult Horror Classics" collection, despite the fact even the most creatve marketing executive or inventive critic could come with a good reason for why it should be considered a horror film. Nonetheless, it's fun flick, and it's presence is one of the many reasons why the set is worth owning if you enjoy old-time B-movies.
Posted by Steve Miller at 3:03 PM